By October 18th, 2016 Marketing, Social Media
One Comment
Brace yourself Marketers because we’ve got some exciting news that’s going to transform the way you use Twitter Ads.

Over the weekend Twitter opened up its Lead Generation Cards to everyone. See how the pros are doing it here.

Well, you know when you expand a tweet and you sometimes see some multimedia content sitting below it? That’s a Twitter Card. You’ll see it on Twitter.com, or in Android and iOS applications.

The Lead Generation Card is a way to use Twitter Cards to generate leads directly within a tweet. (Bear in mind, these occur only within Promoted Tweets.) It’s a “great way to generate new contacts because the user’s information — name, email address, and Twitter username — are all automatically pulled into the Card.  All users have to do is click ‘Submit’ on the Twitter Card.”

Why is this a HUGE WIN for Marketers?

Well, because it makes generating leads on Twitter easier. Mashable shared some interesting data on how Twitter Lead Generation Cards are performing for some companies. “In a case study quoted on Twitter’s blog, outdoor gear and apparel company Rock/Creek saw a 4.6% engagement rate and generated more than 1,700 new email contacts in one week by using a Card within a Promoted Tweet.” 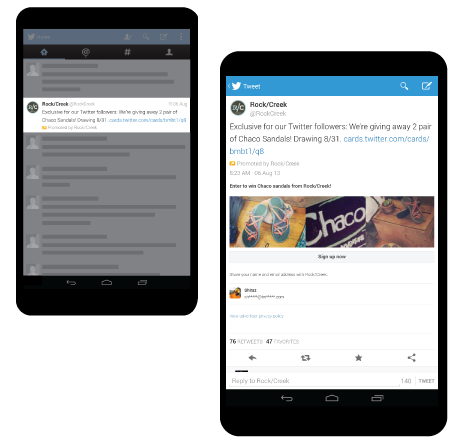 The offer of signing up is winning a free par of sandals just by sharing your email address. You can also apply this this to a whitepaper, template or an ebook. Twitter will also offer “specific analytics that show you leads generated, your spend, and the cost per lead for any campaigns you run with Twitter Lead Generation Cards.”

How Do You Set Up Twitter Lead Generation Cards?

And that’s it! Now go get started on some Twitter Lead Generation!

Firefly Marketing, pioneers of the digital marketing era, has provided brilliant marketing, advertising, creative and digital services to clients since 1998. We have gained an unprecedented level of experience and expertise in everything from website development to traditional advertising and marketing, PR, mobile marketing, social media - virtually any and every type of marketing imaginable.